• Ueshima Coffee Co., Ltd. was established with capital of 1 million yen; the Tokyo branch was opened.

• The first UCC building, formerly the Kobe Headquarters, was established.

• The UCC president, Tadao Ueshima, was appointed by the Japanese government to lead a team sent to observe how coffee was produced in Ethiopia and three other countries in East Africa.

• UCC Coffee Co.,Ltd., a manufacturer of coffee for brewing, was established in Takatsuki-shi, Osaka.
• Construction was completed for the factory now known as the Osaka Factory, Japan’s first fully automated plant. The plant was the first in Japan to manufacture vacuum-packed coffee.
• UCC began the nationwide rollout of UCC Coffee Bazaar, a specialty store offering roasted beans and custom grinds.

• The industry’s first TV commercial for
home-use coffee for brewing was screened.

• Tadao Ueshima represented Japan at the international coffee conference held in Mexico and gave a speech about coffee consumption in Japan.

• Construction was completed for what is now known as the Fuji Factory, the main plant for whole beans and ground coffee.

• The UCC Blue Mountain Coffee Estate was opened in Jamaica.

• The UCC Coffee Museum was opened on Port Island in Kobe.

• UCC established a subsidiary in the U.S.

• The UCC Hawaii Kona Coffee Estate was opened in Hawaii.

• UCC Ueshima Coffee Head Office was completed on Port Island in Kobe.
• Construction was completed for the factory now known as the Hyogo Beverage Factory.

• Construction was completed for the Rokko Island Factory.

• UCC became the first company in the coffee industry to obtain ISO 9001 certification at all its factories.

• The Specialty Coffee Association of Japan was established and Tatsushi Ueshima became its first chairman.

• The UCC Coffee Academy was opened.
• UCC obtained trademark use and trading rights for Caffè Greco.

• Construction was completed for the Shiga Factory. 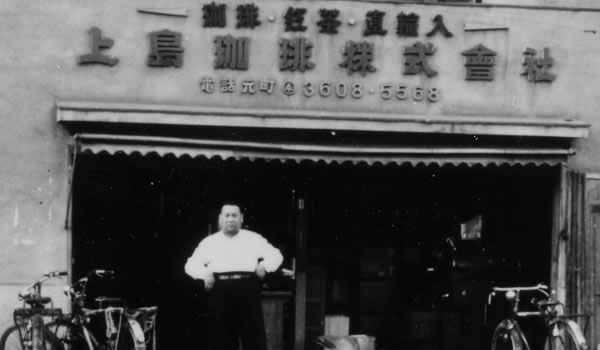 In 1868, the port of Kobe was opened, and along with it entered a range of elements of Western culture that quickly took root in Japan. In 1933, Tadao Ueshima, who had founded a wholesale business in Kobe dealing in butter, jam, and other Western food products, was amazed when he sampled his first cup of coffee at a shop.

Was there anything else as delicious and deep as this?
In Kobe, where the locals loved the latest and the greatest, coffee was sure to sell, he thought.

With this instinct as his compass, Tadao immediately set about launching a roasted coffee business. The coffee shops that were beginning to gain popularity at the time played classical music and were places where people gathered for friendly chats. The focal point of this experience was, of course, the coffee. This new, modern beverage had captured people's attention in the blink of an eye.

However, with the start of WWII, coffee was banned for import, so the business was put on backburner.

It was 1950 when the import of coffee was finally reopened. Tadao was at the ready, having begun talks for the import of Colombian coffee before the pack. People were craving coffee, and he was there to provide it. Using the advantage of his position in Kobe, with its port for international trade, the "Coffee King" would go on to devote his life to coffee.